Tour the UK Coast on a Bicycle 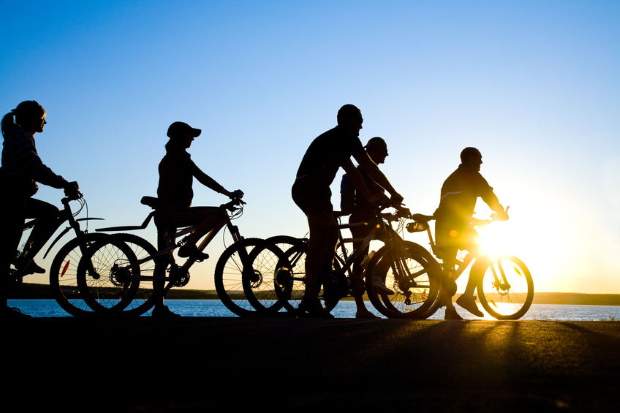 The coast of Britain is famous for a few things, including the impossible puzzle of how long it is exactly. You can zoom in and zoom in and you keep finding more coast. There’s some pretty fractal maths to explain how that works, but this is about cycling around the coastline of Britain and Northern Ireland. (Britain is the island, UK is the countries of England, Wales, Scotland, and NI)

Got a Couple of Months to Spare?

If you’re feeling energetic or particularly insane, you can try cycle the entire 12,429 km or 7,723 miles of the UK coastline. If you include the islands of the UK, it’s over 19,000 miles. Since they united all the coastal routes in the UK into one enormous trail named the National Cycle Network, intrepid cyclists have been able to try their luck at the entire coastline.

Named the Great Tour, the official round-UK trip is a 64 day, 60 miles a day trip to challenge even the best endurance racers. If that’s not your thing, you can join for a day or longer. It’s quite an event and one of the pinnacle cycling events of the year. Last year it began in Anglesey, the ancient home of the Druids. From here, you can cycle all the way around the UK.

Of course, you don’t have to do it as a part of the official race. If you just want to head out on an epic trip with some family or friends, you can. That’s the fun of it. It’s all there for you to enjoy, whenever you please.

Something a Little More Sedate, Maybe?

The National Cycle Network takes in some very gentle terrain. One of the nicest bits to cycle is along the South Coast. If you like fossils and scones, the Jurassic Coast in Devon and Dorset is perfect. Amazing beaches, pretty little towns nestled in sheltered coves, and amazing amounts of naval and military history for the kids to get into. The weather is better than the rest of the UK too, so it’s a perfect summer holiday.

Head west from Dover to the Lizard at the end of Cornwall and enjoy the 400 or so miles of ever changing scenery. There are plenty of great places to stop along the way and no shortage of bike repair shops. Don’t like the look of the next stretch? Take the coast train and enjoy it in sheltered style.

The Celtic Trail West starts in East Wales in a town called Chepstow, heading west into Pembrokeshire in the west of Wales. This route shows off the diversity of the British countryside, heading through the beautiful parks of Penelta, Taff Bargoed, and Sirhowy. Running through the valleys of South Wales, often along disused railway tracks through wooded valleys, the route emerges into the West to grace the Welsh coast. Heading out from Swansea, riders encounter the rugged and wild coast of the South West. Heading west, then north, you head through some National Trust areas, ride by some beautiful lakes and reservoirs, and then up to Pembrokeshire. One of the prettiest spots in the country, the National Park is a must see if you’re in Wales. Then inland to Camarthen (look for the castle) and then up to Anglesey and beyond. A route full of history and untouched nature.

The Scots are an intrepid and adventurous people with a fine sense of humour. You’ll see why they need to laugh when you cycle some of their routes. Although the West of Scotland can even grow palm trees in parts, the entire coast is renowned for its ever changing weather and rugged landscapes. There are plenty of routes suitable for children, but it’s the really adventurous who love cycling on the Scottish Coasts. Some of the toughest rides in the country are along this coast.

If you’re willing to brave the temperamental weather, you are in for a treat. Scotland is not crowded like the rest of the UK and you can easily find yourself alone with nature. And what nature! Immense pine forests, vast, empty beaches, estuaries and coves. There is so much to see and explore, and you can on the National Cycle Network. Scotland is not a place you’d want to get stuck outdoors, so pack a tent or plan ahead to make sure you’ve got accommodation. After a long day’s riding, sit in an ancient pub while the locals regale stories and play Celtic reels on their fiddles, pipes and guitars. Cycling the Scottish coast is an unforgettable experience, just talk to anyone who has done it. People go back year after year for the seclusion, the amazing connection with nature, and the friendliness of the locals.

Filed Under Cycling Tagged With coast
0 comments… add one

The UK has an almost embarrassing number of amazing places to cycle. It is like everything in the UK is... END_OF_DOCUMENT_TOKEN_TO_BE_REPLACED

Yorkshire, the biggest county in the UK, hosted the initial stage of the Tour de France in 2014. Something about... END_OF_DOCUMENT_TOKEN_TO_BE_REPLACED

When the Tour de France came to Yorkshire in 2014, nobody could have expected how much of an impact it... END_OF_DOCUMENT_TOKEN_TO_BE_REPLACED

The coast of Britain is famous for a few things, including the impossible puzzle of how long it is exactly.... END_OF_DOCUMENT_TOKEN_TO_BE_REPLACED

The UK has no shortage of epic bike rides. From the gentle rolling hills of the South Downs to the... END_OF_DOCUMENT_TOKEN_TO_BE_REPLACED