Which Cities are best for Bikes in the UK? 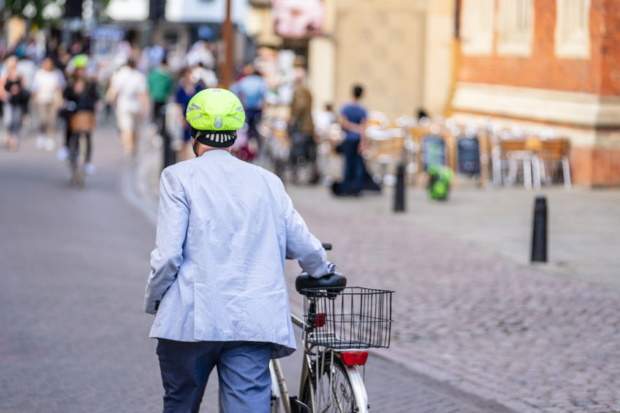 We Brits love cycling, but the cycling experience can vary a great deal from city to city. Some, like London, have brilliant areas for cycling and dangerous areas for cycling. Most cities in the UK are good for bikes, but some are very good, so let us take you through which ones are the best.

With more than 100km (80 miles in Brit-speak) of dedicated cycle routes, Cambridge is very bike-friendly. Cambridge is a wealthy area and it is quite compact, so there is a lot of cycling culture there. A big advantage? It’s very flat. The local government is keen on getting more cyclists on the roads and gives cyclists priority on the road in certain areas. Oxford is close by and has a similar bike culture and infrastructure. Both cities are very beautiful and rich in history, well worth visiting!

Manchester is known as the capital of the North. The industrial revolution started there and many great scientific discoveries have been made in this ancient and illustrious city. It has one of the best music scenes in Europe and some amazing galleries, not to mention the world famous university. It’s definitely worth visiting on your bike because it is quite flat and has a lot of cycle-friendly infrastructure.

One of the best things about Manchester is the easily available countryside. Cycle for half an hour in any direction and you’re in the Lancashire dales or the Peak District. Any time of the year, the terrain is incredibly beautiful and thousands of people head out on their bikes every day to explore and enjoy it. Join them.

A small English city in the South West, Exeter has some incredible history and architecture, including a thousand year old market and an astounding cathedral. For a quintessential bit of southern Englishness, it is hard to beat. Exeter is one of the best cities in the UK for cycling because it is mostly flat, has relatively quiet roads, and the local government has invested in making it cycle friendly. It’s beautiful and a great spot to explore the amazing south western coastal areas.

Scotland might not have the most cycle friendly cities but Edinburgh is an exception. Although the city itself is based on an extinct volcano and is therefore quite hilly, it is very bike friendly. The city is worth visiting, it’s stunningly beautiful and perhaps the funniest place on earth (although the Glaswegians would disagree!). Plenty of cycle paths and the incredible surrounding countryside make it the top city to visit by bike in Scotland.

One of the safest places in the UK to cycle, Bristol is fast rising as a cycle hub. Easy access to Wales, Devon, and Somerset makes Bristol a top destination for the curious and the adventurous. The city has a good amount of cycle-friendly infrastructure and fills in pot holes well!

Cardiff is the largest city in Wales and has some of the best cycling roads. It is a leafy, cosmopolitan place you can easily navigate on a bike, and if you want to go north and explore the amazing Welsh countryside, it’s a brilliant place to start.

Leeds hosted the inaugural stage of the Tour de France in 2014 and the whole city has gone bike mad since. The annual Tour de Yorkshire draws huge crowds and the city itself is very easy to navigate on a bicycle. The centre is very compact, so everything is within easy reach. The reason so many people go to Leeds to cycle is the Yorkshire Dales, an incredible area of natural beauty less than 20 miles from the centre of Leeds. The surrounding area is full of picturesque towns and amazing cycle routes – just watch the footage from the Tour de France to see!

Cycling in a huge city like London is many people’s idea of hell but large parts of it are actually very bike friendly. The traffic is always a concern but recently, dedicated cycle lanes have been installed across much of the capital, making it much easier to safely get around on a bike. It is not an ideal city to commute in, but if you are visiting, it can be worth exploring on a bicycle. Richmond Park and the many other parks in the capital are beautiful in any season, and the cycling communities are very strong in London. The air is quite polluted but not as bad as some capital cities. Well over 300 bike shops dot London, making it very easy to get repairs.

Filed Under Cycling Tagged With cities
0 comments… add one

The UK has an almost embarrassing number of amazing places to cycle. It is like everything in the UK is... END_OF_DOCUMENT_TOKEN_TO_BE_REPLACED

Yorkshire, the biggest county in the UK, hosted the initial stage of the Tour de France in 2014. Something about... END_OF_DOCUMENT_TOKEN_TO_BE_REPLACED

When the Tour de France came to Yorkshire in 2014, nobody could have expected how much of an impact it... END_OF_DOCUMENT_TOKEN_TO_BE_REPLACED

The coast of Britain is famous for a few things, including the impossible puzzle of how long it is exactly.... END_OF_DOCUMENT_TOKEN_TO_BE_REPLACED

The UK has no shortage of epic bike rides. From the gentle rolling hills of the South Downs to the... END_OF_DOCUMENT_TOKEN_TO_BE_REPLACED